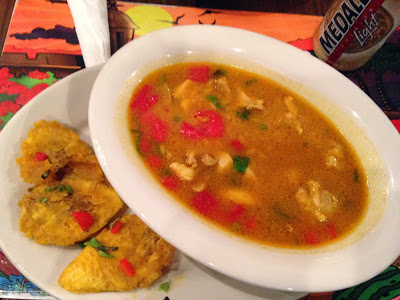 We drove past Palmas looking for a parking place in Old San Juan and returned after seeing what looked like a fiesta going on in the street outside. It was a small place with a large crowd outside and music blaring off the beaten path on the north (uphill) side of town.
We ordered the Asopao de Pollo (chicken and rice stew – $13.99) and Queso Frito (fried cheese with mango sauce -$8.95). The cheese was good, probably $3 overpriced for the size even in Old San Juan, with a mango dipping sauce.
The chicken stew (Asopao de Pollo) was very good, but at $13.99 for a few chunks of gristly chicken, some red bell pepper, and a half a cup of rice in chicken broth was probably $6 more than it should have been while still allowing a fair profit for the proprietor.
I had two cervezas Medalla and at $3 a pop they were twice the price I had paid our entire 3 weeks on the island.
Javier, the owner, stopped by our table and lopped-off half of an avocado the size of a watermelon (Javier and CombatCritic pictured). I tossed it in my stew and added some butt-kicking hot sauce, but made the mistake of touching my eye  … EYE CARAMBA!
Don’t get me wrong, the food was good and the bill came to $42 including 20% tip, not horrific, but more than we should have paid for a couple local beers, an appetizer, and an cheap-to-make entree.
I hope Javier figures out that knocking a couple bucks off the prices will result in happy customers, glowing reviews, and much more customers and money in his pocket. He and his staff were very nice and we enjoyed our visit even if it was not the best TravelValue in Puerto Rico.
CombatCritic Gives Palmas de Boulevard 6 Bombs Out of 10 … BOMBAS ARE BUENAS!
Key Words: Palmas, de Boulevard, restaurant, food, Caribbean, Puerto Rico, puerto, rico, old san juan, old, san, juan, chicken, stew, asopao, cheese, fried, frito, queso, CombatCritic, TravelValue

San Juan, Puerto Rico: We came for the piña coladas… advertised prominently out front as “2 for 1” until 7pm weekdays … and decided to try a burger ($10.95) with cheese and fries because the server told us “our burgers are the best, not only in Puerto Rico, but in ALL OF THE US!” We trusted her, first mistake!

Our burger FINALLY arrived after 30 minutes and was slightly bigger than a White Castle (Whitey One-Bite). There was no sauce, the patty (advertised to be 8 ounces) was small, maybe 5 ounces at best, and accompanied by a pickle spear, very small slice of tomato, and a little lettuce. The fries were shoestrings and not many of them at that. We finished the sandwich literally in less than 3 minutes and I am not a fast eater by any stretch.

Thankfully, the piña coladas ($9) were large and tasty, not strong, good, but thank God it was happy hour because they were way overpriced … $33 for two drinks and an itty-bitty burger … Never again!
CombatCritic Gives Patio de Sam 3 Out of 10 Bombs … BOMS ARE GOOD!