Not a great variety and not anything I could do without EXCEPT the lady selling stuff that keeps mirrors, windshields, eye/sunglasses, and other things glass from fogging up. The sign said 1 for $7 and 4 for $20, but she offered me 1 for $5 and 3 for $10, so I got 3. It will be worth it if I can keep my sunglasses from fogging up while pl;aying golf in the humid Midwest heat! 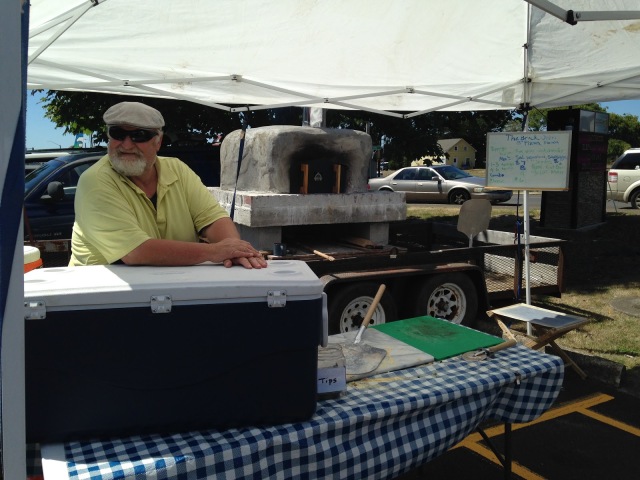 CombatCritic Gives The Waldport Wednesday Market 5 Bombs Out Of 10 … More Bombs Are Better!

Little Saigon Cafe
1524B W 23rd Street
Lawrence, KS 66046
Phone: (785) 856-8010
http://littlesaigonlawrence.com/
Open 10AM to 8PM daily
Closed Sundays
Our friends told us about Little Saigon Cafe, a small, unassuming diner on 23rd Street, claiming that it is a terrific value.  I love Vietnamese food, particularly deep fried Vietnamese egg rolls with fresh mint, wrapped in lettuce leaves, and accompanied by a mild sweet and spicy dipping sauce.  Unfortunately, the fried egg rolls ($3.25 for two) only come with dipping sauce, so I asked if I could get some lettuce and mint and the lovely young lady that took our order was happy to comply.
You enter through what looks like a (black) service door next to what is supposed to be the main service entrance and give your order to the hostess at the cash register.  There is a large menu on the counter for reference, but it was slightly uncomfortable arriving for the first time, being unfamiliar with the menu and having to make a quick decision while trying not to hold-up the line behind us. The restaurant is small, four four-top tables and a counter that seats six, so after submitting our order, we were lucky enough to have one table still available.
I did not see a curry on the menu, for a Vietnamese restaurant an unusual experience, so I asked if they made any curries.  The man whom I assumed was the owner and knew was the chef (the kitchen is right there in front of you behind the counter) overheard me and said “we can make a curry with beef, chicken, tofu”, telling me the “Saigon Beef ($8.99) is not on the menu”.  Sold!  My wife, who is predominantly vegetarian, ordered the Vegetable and Tofu Pho ($6.99).  We also ordered the fried egg rolls, one order of pork and one vegetable (also $3.25) for my wife.
The hostess, who doubled as a server after taking our order at the counter, quickly arrived with the lettuce and mint, followed shortly thereafter with the egg rolls.  Unfortunately, both of our orders were overcooked, dark and crispy, and even though I like my egg rolls crispy, they were burnt and not golden brown as they should be.  The flavor was still good and the filling mostly pork in my case, a nice surprise for a carnivore such as myself.  The lettuce and mint helped mask the flavor of the overcooked egg rolls. I have had better Vietnamese egg rolls, with all of the accompaniments, elsewhere, but they filled the void in any event.
The entrees arrived a little too quickly as we had only just received our appetizers, but it worked out well because the entrees had time to cool off enough to be able to eat.  My Saigon beef was massive, but mostly (egg) noodles and very little beef for the price.  There were six or seven very small pieces of sliced beef at the most, less than two ounces I would guess and not nearly enough to satiate my hunger for meat. Mostly noodles, the curry sauce was tasty at first bite and the dish was infused with stir-fried green onion and what appeared to be egg, a strange new addition in my experience. The combination of curry and egg was not something I have had before and after the first bite, it became a bit off-putting and with the small amount of beef rapidly depleted, I did not finish my dish.

My lovely wife’s Vegetable Tofu Pho came in a massive bowl and was quite pleasing to the eye.  A savory blend of snap peas, tofu, bean sprouts, carrot, kale, peppers, green onions and egg noodles, the broth was light but flavorful and a nice choice for a cold winter’s night.

Little Saigon Cafe was decent, but not the best Vietnamese food I have eaten by far.  The entree prices seem a bit high for a few vegetables, broth, and noodles. With the Pho’s ingredients in the neighborhood of $2 to $3 max, $4.99 to $5.99 would be more reasonable than the current $6.99 price tag.  Many University of Kansas (KU) student reviews on Yelp and elsewhere indicated that the prices are in-fact a bit high and in a college town such as Lawrence, restaurants must cater to the needs of cash strapped students or face the music.  Little Saigon’s staff are very friendly and helpful, and that is a rarity these days, particularly in Lawrence where the food scene is not well known for excellence or customer service based on my experience.  The food is prepared to order and the ingredients fresh, so give Little Saigon Cafe a try … maybe the food will be more to your liking than mine, but then again, I am a bit finicky when it comes to Asian cuisine where lots of meat and thick, flavorful curries are more tantalizing to my tastebuds than broth, veggies, and noodles.