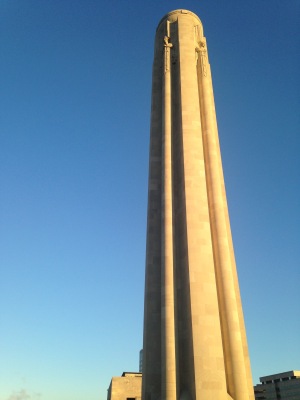 Maybe I was expecting more based on the reviews and word-of-mouth regarding the National World War I Museum, but comparatively speaking it is not even close to the top of my list of “must see” museums. Do not get me wrong, the grounds are impressive, the memorial iconic and spectacular, and the view of downtown Kansas City, Missouri unequaled, but the museum itself is overpriced and lacking in many ways.

Beside the numerous cannons and artillery, there are two airplanes, a tank, a couple vehicles and not very many World War I relics. Like the Eisenhower Library in Abilene a couple hours west on I-70, there are plenty of things to read and a couple movies, but authentic, original World War I artifacts and memorabilia are sadly lacking.

One interesting, interactive display is a large, life-size trench running down the right wall as you enter the first hall. You can access holes in the trench wall at various points as you meander through the first five or six exhibits. As you stick your head through the wall to get a glimpse of what might have been happening nearly 100 years ago, the voice of a soldier reading a letter home or making a diary entry automatically comes on, an interesting and surprising addition. 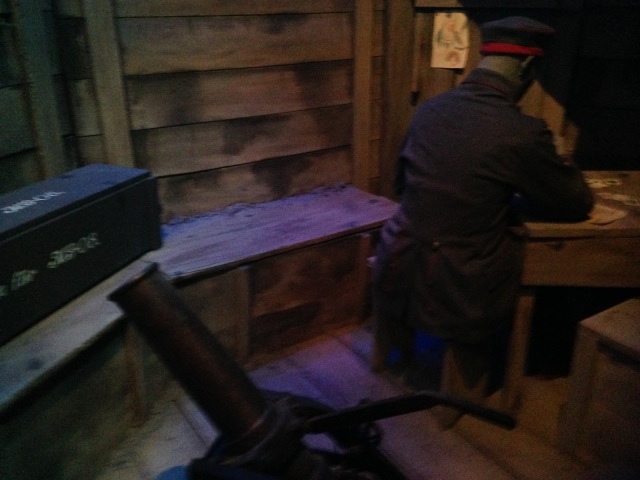 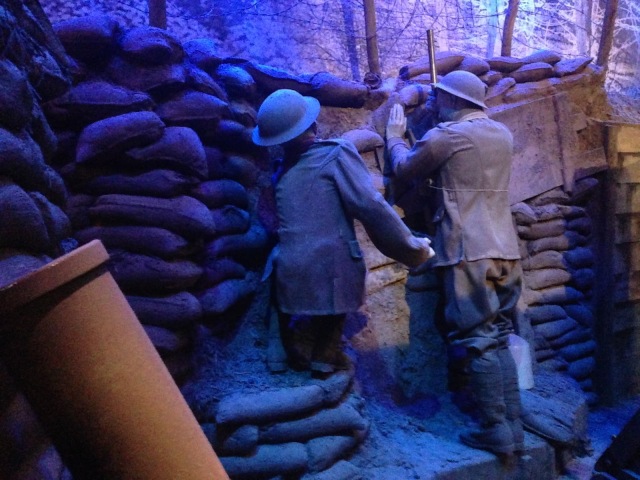 We paid $12 each with our military and teacher discounts, still a bit stiff considering the size of the museum and the number of exhibits. A significant portion of the museum is occupied by a large circular, central room containing what are supposed to be interactive displays on a variety of subjects. If they worked, they would have been quite interesting, even spectacular. Massive computer screens laid out like large tables, you are supposed to be able to use the little red flashlights, attached to the tables by a cord, to point to the horizontal screens and retrieve information on a particular World War I topic. However, the flashlights did nothing, so the screens displayed whatever they were programmed to display and nothing more. The most interesting aspect of these central rooms were the numerous soundproof studios where you can sit and listen to music and voices of famous people of the time among other things.

Another overly large exhibit portrays trench warfare in a 100 foot long trench, below the overhead walkway and viewing area, with soldiers marching and a bi-plane overhead, all in front of a large screen running a narrated video of how the US entered the war (undetermined schedule). The video was interesting, but we happened upon it by chance, having no idea exactly what it was at first or how often the 15-minute show ran. This exhibit, along with the central rooms with interactive displays discussed previously, take up at least half of the museum’s square footage and could have been better utilized in my opinion.

There were several uniforms and guns, flags and banners, even two Congressional Medals of Honor, an early delivery truck, an ambulance, a mule train, a bi-plane and a tank. We had planned on spending an hour-and-a-half, but were done in a little over an hour. 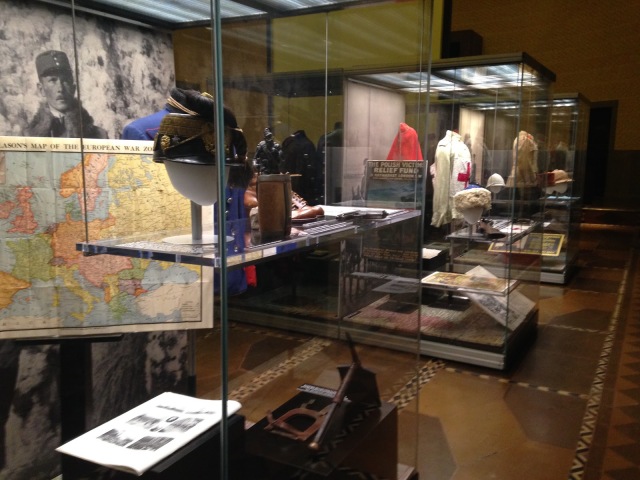 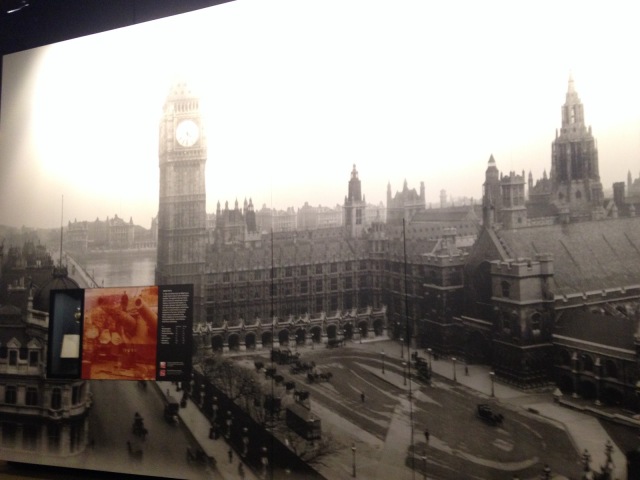 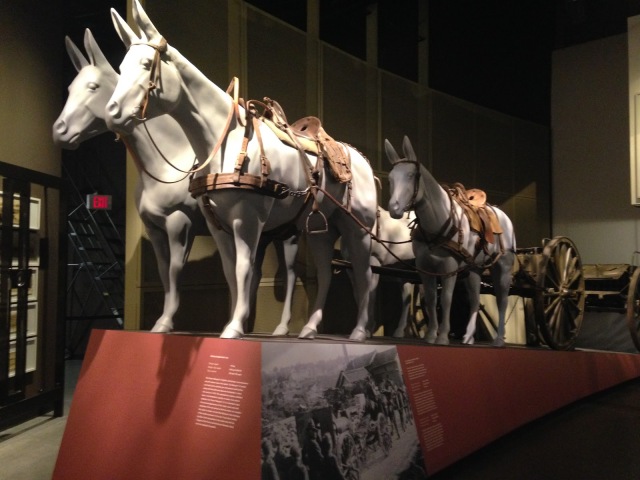 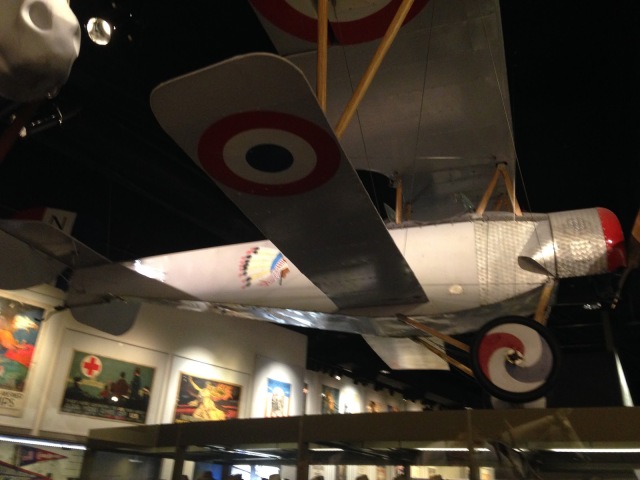 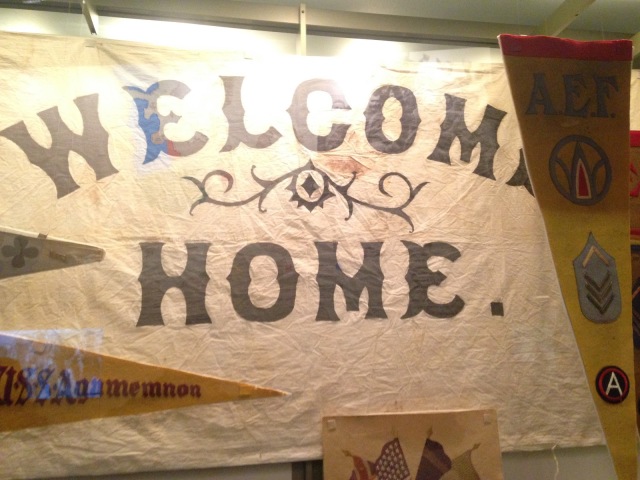 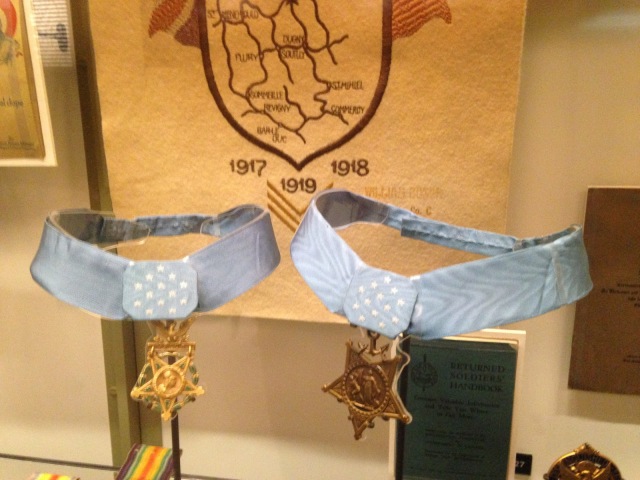 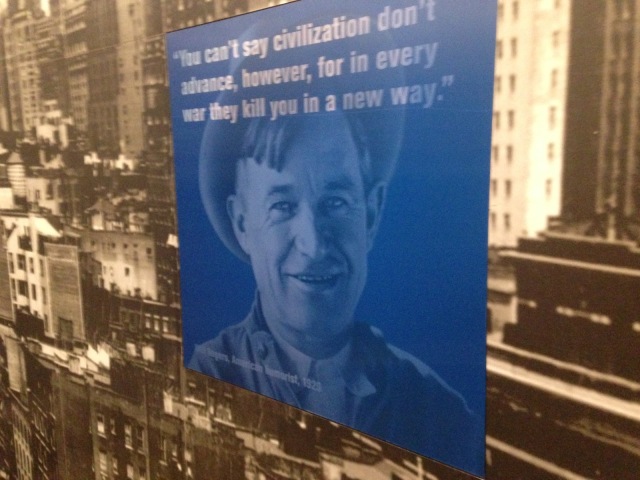 At $14 for a two-day pass, I am not sure what you could possibly do for two days here, the museum is not particularly cheap. Something more in the $7 to $10 range would seem more appropriate. Don’t get me wrong, the “Great War” does not get the attention it deserves and a far as Kansas City is concerned, this museum and memorial is a big, important attraction. But having seen the Smithsonian and National Air Museum (both free by the way), the Vatican Museum and the Forum in Rome, the Louvre, Musée D’Orsay and L’Orangerie in Paris, Del Prado in Madrid, the National Archeological Museum in Athens, and the British Museum, Tate Gallery and Tower of London in London (of course), just to name a few, this museum just does not stack up in terms of exhibits, artifacts and bang-for-the-buck. Did I say the view of downtown Kansas City is phenomenal? 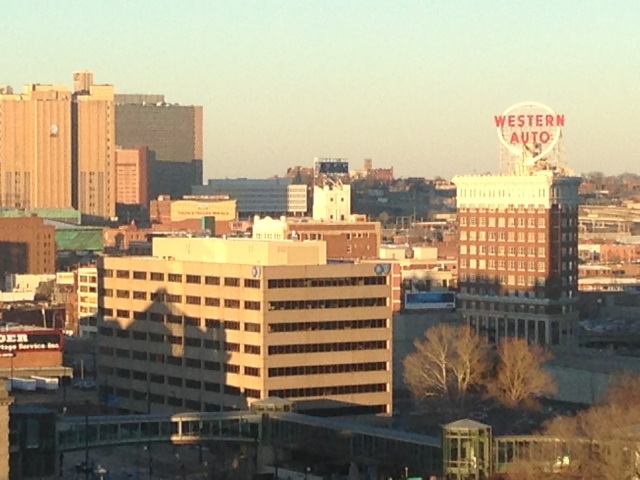 CombatCritic Gives The National World War I Museum and Memorial 7 Bombs Out Of 10 … More Bombs Are Better!