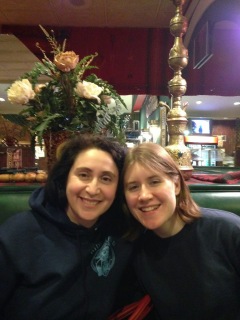 My wife had heard good things about Aladdin Café in downtown Lawrence (Mass Street), so we figured we would give it a try while a friend was visiting from Colorado.  She had never had middle-Eastern food before and was enticed by the unfamiliar smells emanating from the kitchen.  As we entered there were two parties seated out of probably 20 tables throughout the restaurant which is sparsely decorated with a small store containing a few middle-Eastern products in the rear next to the kitchen.  We stood there for close to five minutes while the only server in the place yukked it up with a table of three men whom apparently could not make up their minds and could obviously care less that we were standing there like bumps on a log.  She finally ended her conversation and came over tho seat us. 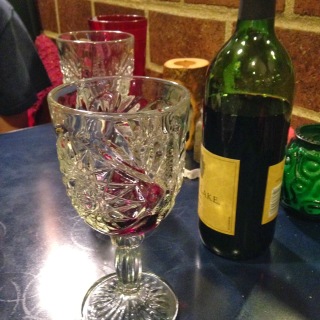 With no bar or alcohol on the menu, you are able to bring your own wine or beer (no corkage fee), so I had done my research on Yelp and brought a nice bottle of wine, a $10 Syrah that would easily cost $30 in most restaurants.  This is a nice option and it was the first time I had the opportunity to partake of such a custom, definitely keeping the bill from getting out of hand.  The server brought two glasses along with our water and a corkscrew.  It would have been nice if she had offered to open and pour the wine for us, and she would have been tipped accordingly, but that was not the case.  I opened the wine, poured, and waited for our server to take our order.
Being our first visit, we decided to try the Agrabah Appetizer Combo, a combination of hummus (blend of chickpeas, tahini, lemon, and garlic garnished with sumac, parsley, and hot sauce), baba ghanouj (roasted eggplant blended with

garlic, and onion blend), dolmati (VERY small rolled grape-leaves stuffed with rice, tomatoes, and herbs, simmered in tomato and lemon juice), feta cheese, and Kalamata olives ($7.99) served with a small plate of pita bread.  After 20 minutes and no appetizer, I thought our server, who disappeared much of the time we were there, had forgotten, so we tracked her down to ensure our combo platter arrived well before our meals.  The hummus, genie dip, and baba ghanouj were plopped on the oval plate alongside two small falafels and two small dolmati.  Considering the price and that were were three, I would expect a bit more, considering the fact that the dolmati and falafels were so small you could pop one in your mouth and still have room for an entire White Castle burger.
My wife had the Falafel and Baba Ghanouj Sandwich (Vegan – roasted eggplant spread and falafel served with tahini sauce on pita bread – $7.99) which came with rice.  My wife wanted French fries instead of rice, so the server told us it would be a $1.00 up-charge, not unreasonable, but when the plate arrived there were hardly any fries, maybe six or seven medium size pieces and not nearly enough to satisfy her hunger or justify an extra dollar.  The sandwich had much more lettuce than fillings, a couple small falafels in a medium size pita and at $8.99 including fries, no bargain.  My wife is not a big eater and was still hungry after finishing her food, not a good sign.
I decided to try Aladdin’s Gyro, a combination of grilled lamb and beef ($7.99 – chicken also available) with lettuce and tomato and topped with tzatziki, a creamy Greek cucumber sauce.  I also ordered the fries and after tasting our friend’s rice and was happy to pay an extra dollar for a few measly French fries.  Her rice was bland and white with a dollup of canned mystery tomato sauce on top, a tasteless side and nothing like the wonderful saffron rice I had eaten in the middle-East in the early 2000’s.  The few small slices of gyro meat inside were overwhelmed by the massive amounts of cheap lettuce and a few pieces of tomato.  I have had gyros with three times the meat in Greece and the U.S. that were less than half the price, so do not expect good value when visiting Aladdin Café.
I am not a huge fan of middle-Eastern cuisine, but the offerings at Aladdin were enough to allow some variety.  The service was inadequate, the food mediocre and NOT plentiful, and the ambience non existent.  It is unfortunate because we live just a few blocks away from Aladdin and it would be nice to have a few exotic options in the neighborhood.  Unfortunately, the only thing exotic about Aladdin Café on Mass Street are the prices and that is not a good thing.
CombatCritic gives Aladdin Café 4 Out of 10 Bombs … BOMBS ARE GOOD!