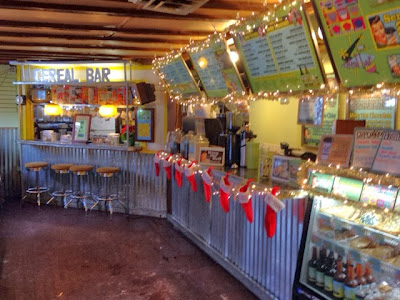 Our very first visit, we had a cappuccino with homemade almond milk, a 16 ounce latte with skim milk, and a bacon, egg and cheese breakfast panino to start Christmas Eve Eve day, paying just $10 for the whole shebang!
The Java Break has friendly service and four large rooms perfect for studying while ingesting some much needed caffeine while studying or an early morning breakfast with your (my) sweety.
The place may seem small from the outside, but it’s not. They have fair prices and we will be back again soon!
CombatCritic Gives Java Break 7 Out of 10 Bombs … BOMBS ARE GOOD!

(816) 505-9097
11015 NW Hwy 45
Parkville,MO 64152
RANCHOGRANDECANTINA.COM
Rancho Grande in Parkville is a weekly staple in our house. Yes, of course it is Americanized Mexican, but we are in America after all. If you have a craving for inexpensive, quality food, this USED TO BE THE PLACE. I have been a customer for five years and have continued to go back week after week, but that could soon change!
You would think that customers who come back week after week after week, particularly ones who have a restaurant and food blog, would be known by name, perhaps greeted with more than indifference, but that is not the case at Rancho Grande Cantina.
The food is good, normally consistent, but that has changed recently.  For example, on their “Fajita Special” night a few months back, I sat in the bar and had some of the worst service in recent memory. On the back of many employee’s shirts is the phrase “I know Joe”, referring to the alleged owner, a guy named “Joe” apparently. Well, Joe was sitting in the bar with several of his cronies and my waiter seemed more focused on making Joe happy than any of his customers.  Joe and his pals were knocking back the beers while I sat, and sat, and sat, and waited for my appetizer, then dinner, when my waiter was more interested in making sure Joe and his pals were supplied with cold beer than taking care of his customers.
The fajitas, although discounted $3.oo, were more than 30% less than their normal portion AND BURNT. I could not get my waiters attention long enough to convey my displeasure because of his infatuation with Joe, so I went home and conveyed my displeasure via Yelp and Foursquare.  I was being lazy.
Today is Cinco de Mayo and, to my displeasure, an extremely busy night on a normally quiet Sunday, our normal Rancho Grande evening.  The hostess told us our wait would be 30  minutes, but we ended up waiting over an hour. When I saw that we were next on the list for a table, we went to the front and waited next to the hostess, thinking we would have a table in a few minutes.  A party of eight was seated before us even though they fell after us on the list, but that is not irregular.  What was irregular was the party of two, plus a child, that got our table because they were “friends’ of the hostess.  I saw the man conversing with employees earlier, so I knew that he was either an employee or a friend of staff.  So when he and his family were seated, at our table, without being on “the list”, I was unhappy, but because of the mass confusion, I kept my mouth shut.
Our server did not greet us for close to ten minutes after being seated and when we ordered, we let her know that my wife’s quesadilla was cold last time she ordered it, asking her to please ensure that it was properly heated this evening. When it arrived, 30 minutes later, it was luke-warm. The young woman that dropped-off the plates ignored our pleas for assistance, pretending that she did not hear us as we attempted to point out the chill on the quesadilla.  Taking several minutes to get the attention of our server, we finally let her know that the meal was cold and finally received our complete meals ten minutes later.
All the while, Joe, whom we still do not know after five years of weekly visits, was sucking down a beer by the bar, ignoring his customers and the horrible service we were receiving.
We have spent literally thousands of dollars at Rancho Grande in the five years we have lived in Kansas City.  I enjoy the food and some of the servers recognize us although none even have any idea what our names are.  I would expect a little more of a business whose business is customer service, but customer service seems to be a thing of the past, so why should I be disappointed?
Joe, whom I still do not know, even though I have been eating at his restaurant every week for five years, should be ashamed for his apathy toward guests and his propensity to suck down beers rather than  ensure his customers get the service and quality we deserve. I do not expect, nor would I accept, special treatment because I am a food critic.  But I am a paying customer and would expect that our loyalty to his business would at least be appreciated, something we have not felt in five years of eating at Rancho Grande. Maybe it is time to find a proprietor and restaurant that appreciates our hard earned money and loyalty.

In all, Rancho Grande in Parkville WAS an excellent choice for quality American-Mexican food with large portions at a reasonable price, but if you want to be appreciated … go elsewhere!

CombatCritic gives Rancho Grande Cantina in Parkville 5 (used to be 7) out of 10 BOMBS. Bombs are good!