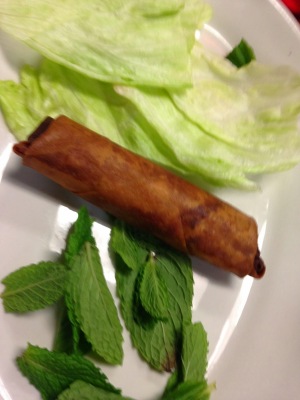 We started with the Vietnamese egg rolls (4 – $5, you have to ask for them specifically) which are only different from regular egg rolls in that you get lettuce leaves to wrap them in and cilantro, mint leaves (if available), and sliced carrots to add inside the lettuce as well as a spicy rice vinegar dipping sauce … YUM!

I had the beef curry and my wife had the vegetarian pho. Both were excellent although the curry was not of the variety of Vietnamese curry that I am used to (a thick red curry with mostly beef). The pho, my wife’s favorite, was chock full of veggies and as tasty as we have had.
The staff are very friendly and helpful and the restaurant is extremely clean. It is not a huge place, but we had no difficulty getting a table. The neighborhood looks a bit dodgy, but we have never had any problems either at Vietnam Cafe or Garrozo’s which is not far away.
CombatCritic Gives Vietnam Cafe 8 Out Of 10 Bombs for good food and service at a GREAT VALUE … BOMBS ARE GOOD!


This restaurant just opened in place of Wild Pho, another Vietnamese pho restaurant that recently closed. According to the server, the new owner, a very nice woman, apparently used to be connected to either Wild Pho or the space itself. Anywho, we thought we would give them a try considering they are so close to our home.
I asked if they had Vietnamese egg rolls, but the server did not know what I was talking about, so I asked the owner and she told me “no problem”. At $5 for four (4) pork egg rolls accompanied by lettuce leaves, sliced carrot, cilantro (no mint leaves), and a dipping sauce of rice vinegar and seasonings of unknown, but tasty origins, they were excellent or as Tony the Tiger would say “they’re grrrrrrrrrreat!”

I tried the Steak Pho (regular – $7.99) with veggie accompaniments and Sriracha OF COURSE! Extra meat is $1.99, which I ordered, but apparently did not get and was not charged for. No biggy because I was plenty full on the delicious broth, abundant noodles, a little sliced beef, and extra vegetables (no charge), including bean sprouts, sliced jalapeño, and cilantro.
They are updating the menu and a few dishes will not make the cut apparently, including the calamari, but if the pho was any indication of the quality and value of the meals, we will be back soon and provide an updated review as we try new dishes.